Ellie McDonnell – “I don’t remember much about that day. All I know is that the air ambulance saved my life…”

Last July, 15 year old Ellie McDonnell from Co. Down was preparing to represent team Northern Ireland at a show jumping competition in Wales when she was involved in a terrible accident that could have had fatal consequences.

Ellie was riding her quad on her family’s farm in Portaferry when she collided with a jeep driven by her mother at a blind corner on the lane leading to their home. Ellie was thrown from the quad, crashed into the windscreen of the jeep, and landed in a ditch at the side of the lane.

Ellie’s mother Mary ran to her and phoned the emergency services. Ellie sustained broken arms, legs, eye sockets, cheeks and teeth and had severe swelling on her brain. Due to the critical state of her injuries, Air Ambulance Northern Ireland was dispatched to the scene. The Air Ambulance medical team arrived at the family farm and put Ellie into an induced coma to protect her brain – this procedure can usually only be done in a hospital environment but because the Air Ambulance medical team includes both a doctor and a paramedic, they are able to carry out urgent medical care immediately at the scene. The Air Ambulance team then transported Ellie to the Royal Victoria Hospital in Belfast.

Ellie spent eight weeks in hospital, two of which in a medically-induced coma. Her family had been told to prepare for the worst as the extent of her injuries left doctors unsure of whether she would ever be able to walk or talk again. Thankfully, Ellie has since made a remarkable recovery. She is now back at school studying for her GCSEs with plans to pursue a career in medicine.

Speaking about the accident and Air Ambulance NI’s involvement, Ellie said: “I don’t remember much about that day. All I know is that the air ambulance saved my life and without them I wouldn’t be sitting here today. I would just like to thank Air Ambulance NI for all that they have done for me.”

Ellie has now started jogging to help build up her strength and can’t wait to get back on a horse one day soon.

Kerry Anderson, Head of Fundraising for Air Ambulance NI, said: “We’re so glad to hear that Ellie is making such great strides in her recovery and that our medical team was able to provide her with the urgent medical care she needed.  Air Ambulance NI is a vital service that depends on public donations. It costs £5,500 per day to keep our helicopter in the sky and accidents like this prove how important that is.” 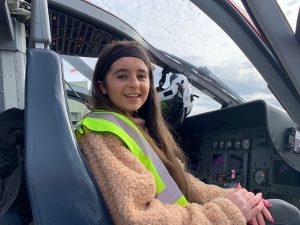