The morning of the 20th March 2018 began just like any other for Damien Laverty (46). Damien left his home in Ballynahinch to go to work at Carryduff Building Supplies, but little did he realise how different his day would turn out to be.

Damien was working with heavy machinery on site when his right arm became trapped above the elbow. The alarm was quickly raised by one of Damien’s colleagues who immediately called the emergency services.

Even though the yard of the site was clear of obstacles, the landing proved to be challenging for the air ambulance due to the significant amount of dust which was created as the helicopter came into land.

At the scene, the NIFRS worked to release Damien’s arm from the machinery and were assisted by one of Damien’s colleagues who was also a former part-time firefighter and played an important supporting role during the incident.

Throughout the entire ordeal, Damien remained conscious and remembers every moment right up until he was sedated. “I think my mind has blocked out the trauma”. Once anaesthetised by the HEMS Doctor, Damien was transferred to the Royal Victoria Hospital by road ambulance, accompanied by the HEMS team where he then underwent crucial surgery to insert metal plates into his arm.

Damien’s road to recovery has been long, undergoing a further operation, two incidences of MRSA, which required surgery, and a requirement for a Picc line to allow for regular antibiotic treatments by a team of dedicated Rapid Response nurses who called daily at his home over a period of 16 weeks. He is also likely to require three further surgeries, however, thanks to the initial care of the HEMS team, the work of the Belfast Trust and the follow up surgery, Damien’s arm has been saved.

Speaking about his experience, Damien said: “It has been a long journey to recovery so far, but I have been making great progress and exceeding the expectations of my medical team. Every week there is further improvement and we are now hopeful that I will gain 95% mobility in my arm. I owe so much to the air ambulance HEMS team, the Northern Ireland Ambulance Service and to the Royal Victoria Hospital for my initial care and treatment. I would also like to thank the staff of the Ulster Hospital and in particular Mr Harry Lewis, consultant Plastic surgeon, and Miss Denise Shirley, consultant Orthapedic surgeon, and I firmly believe that it was their hard work and skill that has meant my story has had a more positive outcome. Since my arm has been saved I have been able to return back to work which is great as it was driving me mad sitting at home. The goal I am working towards now is to get as much usage back in my arm as I physically can.”

In recognition of the life-saving work being carried out by the air ambulance, Carryduff Building Supplies, Damien’s employer, recently held their annual charity breakfast in aid of Air Ambulance NI (AANI), raising over £16,000 for the charity.

Damien said: “The air ambulance costs £5,500 per day to run so every penny really does go a long way to making sure that this vital service can continue. I was delighted when Carryduff Building Supplies nominated the charity Air Ambulance NI for its annual fundraising breakfast. Being able to raise £16,000 on the day was a phenomenal achievement and is the highest amount that has ever been raised at this event so we we’re thrilled to be able to present this to the charity.”

Shirley Gilliland, who owns Carryduff Building Supplies along with her husband John said, “Damien has been part of the company for over 4 years and as a close team we were all gutted when the accident happened. The speed of the response of the air ambulance and the critical interventions at scene have clearly made a difference in Damien’s recovery. We’re so grateful to have him back on the team and doing well.  Whilst you take every precaution accidents can happen, and we are now very much aware of the role that the air ambulance has to play in the local community, including the impact for industry related accidents. I would urge other companies to do what they can to support the service whether that is by corporate donation or fundraising.” 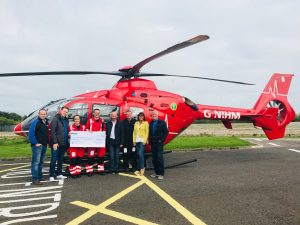